On 3 and 4 November, a Dutch Business Delegation headed by Mr. Daniël Stork - the Consul General at the Consulate General of the Netherlands in Ho Chi Minh City, and the Dutch Bussiness Association Vietnam, represented by Guido van Rooy - Executive Director of DBAV, completed a domestic mission towards Binh Dinh Province. The event was organized through a collaboration between the Dutch Business Association Vietnam, Royal Dutch Consulate General in Ho Chi Minh City, the Provincial People’s Committee of Binh Dinh Province, and the Becamex VSIP Binh Dinh. During the trip, the participants witnessed the investment opportunities that Binh Dinh and Becamex VSIP Binh Dinh has to offer.

The Netherlands is currently ranked 8th out of 140 countries and territories with direct investment capital in Vietnam. Currently, Dutch enterprises invest in 380 projects, with a total direct investment capital of 13.55 billion USD. Investment projects are mainly implemented in Southern provinces such as Ho Chi Minh City, Ba Ria - Vung Tau, Dong Nai, and Binh Duong. Many Dutch investment projects in Vietnam have been operating very efficiently, with famous large companies such as Heineken, De Heus, Unilever,  Philips, and Akzo Nobel.

Binh Dinh is quickly developing into a dynamic socio-economic developing province in the area.

The mission is an opportunity for Binh Dinh province to introduce and promote their industrial parks, universities and vocational schools, investment promotion policies, and favorable conditions for investment promotion in order to attract many more important, diverse, and influential projects to the province.

Binh Dinh is located in the South-Centre of Vietnam. With a coastline of more than 134 km, Binh Dinh is 1-hour flight from Hanoi, 45 minutes from Ho Chi Minh City, and 300 km from Da Nang city. As the nearest gateway to the sea of ​​Southern Laos and Northeastern Cambodia, Quy Nhon city of Binh Dinh province is currently a Grade 1 City, with an area of ​​284.28 km2 and a population of over 260,000 people.

Traffic infrastructure conditions of Binh Dinh have been improved enormously as new roads have been constructed over the past few years. The Government has identified Quy Nhon City (the economic - cultural - political center of Binh Dinh province) as the location for constructing a Type II logistics center: transport operating with high frequency, ensuring smooth circulation: an international seaport (Quy Nhon port), a road system connecting with some national highways, connectivity to the North-South railway system, and a processing-to-international airport - Phu Cat airport.

Currently, there are 9 industrial zones in Binh Dinh which creates a variety of choices for investors. The province also offers abundant human resources with high qualifications from 3 universities and 15 colleges and vocational schools.

Already some Dutch FDI and Dutch-related companies have set their footprints in Binh Dinh, thanks to the Local Authorities who have offered favorable conditions for the investors and helped them set up and do their business here. De Heus, a Dutch multinational agricultural enterprise, has already built and operating actively with 2 factories here in the province.

The Delegation has the chance to witness the potential and development of the province during the half-day tour in Quy Nhon city. Starting with the exploratory meeting with the representative of Quy Nhon Port, the group went to see the modern facilities of FPT university, which offer high-quality students in Information Technology and Business Administration, and processing to focus on Artificial Intelligence (AI). At the end of the tour, the delegation was introduced to the entire Becamex-VSIP Binh Dinh Industrial Park - a typical industrial park of Binh Dinh province developed by two industrial real estate developers, Becamex IDC and VSIP Group. Its integrated industrial park model is already very successful and attracting many FDI enterprises in Binh Duong province.

“I had the opportunity to participate in the Groundbreaking ceremony of the Binh Dinh VSIP project. Today, after 2 years, I was surprised by how things have changed there, from the wastewater treatment to the social housing projects. I’m happy to see some European companies have already found their way and invested in the industrial park” said Mr. Guido van Rooy, Executive Director of the Dutch Business Association Vietnam, at the welcome dinner following the trip, which was hosted by Mr. Nguyen Tu Cong Hoang - Vice Chairman of Binh Dinh provincial People’s Committee, and Mr. Pham Ngoc Thuan, CEO of Becamex IDC Corporation.

The Dutch businesses and Leaders of the Departments of Binh Dinh had in-depth discussions about the favorable opportunity Binh Dinh Province could bring to the investors and, at the same time, fostering intimate relationships between Vietnameses and the Dutch.

On the morning of November 4, 2022, the People's Committee of Binh Dinh province, Becamex Binh Dinh, and the Dutch Business Association in Vietnam had an intensive roundtable discussion around the topic "Sustainable development and construction of a seaport and logistics system."

During the roundtable’s two sessions, the Netherlands Consul General Mr. Daniël Stork led the Dutch Business Delegation, which includes representatives from Royal Haskoning Vietnam, Witeveen+Bos, Damen, and Except Integrated Sustainability to share about their projects, which provided a variety of knowledge on seaport development, ship technology, environment, and urban planning toward the sustainable development.

Click here to view the presentations of the Dutch companies.

Over the past time, the Provincial People's Committee and Becamex IDC Corporation have coordinated, actively built, and developed friendly relationships with state agencies and cooperated in investment and trade with businesses of the Netherlands. However, in Binh Dinh, there is only one project of an investor from the Netherlands, the animal feed processing factory project of De Heus Co., Ltd., with a total investment capital of 20,095 million USD.

At the conference, according to Mr. Duy Nguyen - Marketing Director of
English-Speaking Markets of Becamex IDC, Becamex VSIP Binh Dinh Industrial Park has many favorable conditions for Dutch investors to invest in production, such as 25 km from Quy Nhon international seaport, 30 km from Phu Cat international airport, 9 km from Dieu Tri station, next to Quy Nhon city center; Currently, the IP is also carefully planned, complying with all environmental and sustainability criteria, in order to create competitive advantages and provide comprehensive solutions for investors.

To meet the needs of investors, Binh Dinh province has stepped up investment in building 9 industrial parks and 63 industrial clusters. The province focuses on developing the Nhon Hoi economic zone with an area of ​​over 14,500 hectares, becoming the driving force for the socio-economic development of the province. In particular, prioritizing resources to accelerate the implementation of the Becamex VSIP Binh Dinh industrial-urban - service project in Canh Vinh commune, Van Canh district, with 1,425ha including 1,000ha industrial park, residential area residential, commercial - service 425ha, total capital more than 3,333 billion. Becamex VSIP Binh Dinh is designed according to modern, green, clean, beautiful, and sustainable criteria, aiming to attract USD 2 billion in industrial production; create jobs for 120,000-150,000 workers; contribute to the state budget of more than 400 billion VND/year. The Becamex VSIP Binh Dinh industrial-urban - service project is expected to be an effective investment attraction, contributing to a breakthrough for the socio-economic development of Binh Dinh province in general, as well as the result of Nhon Hoi economic zone in particular.

As an investor in the construction and infrastructure business of Becamex VSIP Binh Dinh Industrial Park, Becamex IDC Corporation is a leading brand in the investment and development of Vietnam’s urban infrastructure and industrial zones. They have committed to providing the best services and utilities, ensuring satisfaction for investors and businesses.

At the end of the conference, Mr. Pham Anh Tuan - Chairman of Binh Dinh Provincial People's Committee, expressed his affection and enthusiasm for local and national development and affirmed that he will always stand by and accompany business by listening, sharing, and solving business difficulties, creating favorable conditions for Dutch enterprises to invest in production and trade in Binh Dinh. With its advantages, available potential, and the support of Becamex IDC, Binh Dinh Province is determined to improve the quality of the business investment environment. Completing the transport infrastructure system and accelerating the reform of administrative procedures toward building a professional, modern, effective and efficient administration are phrases to describe Binh Dinh province’s goal. Striving for Binh Dinh to become an "ideal destination" for domestic and foreign investors in the coming time.

View more photos of the mission at: https://dbav.org.vn/event-photos/ 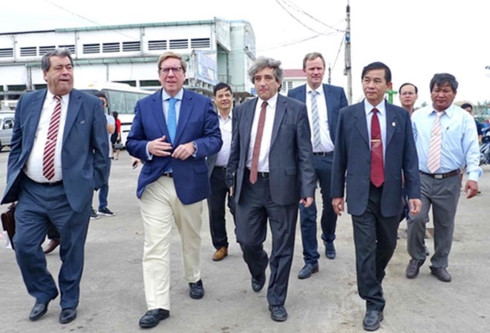 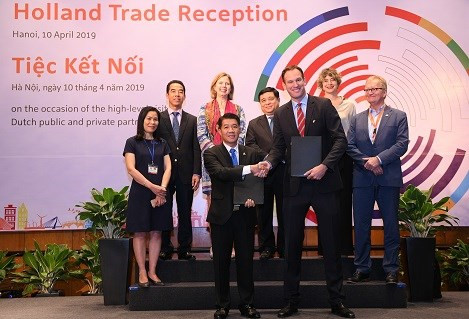